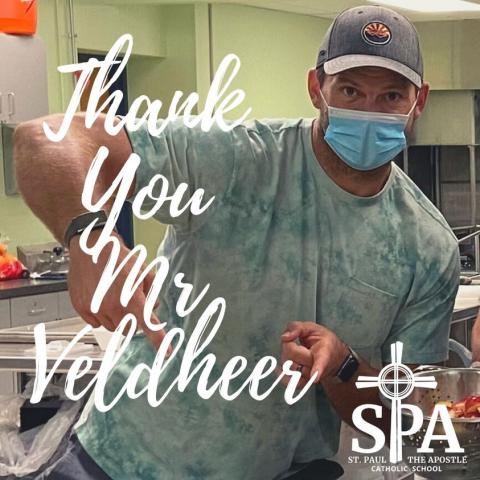 Written by Josh Weinfuss for ESPN in December 2021. Photograph provided by Katie Tietema at St. Paul the Apostle Catholic School.

Like many retired NFL players, Jared Veldheer has found a new way to occupy his time.

He has taken up cooking, which means he spends a lot of time in a kitchen. He's also now into meal prepping and has become pretty good at grocery shopping.

But he's not a chef, he's a lunch man at a school.

Veldheer, who was an offensive lineman for five teams including the Arizona Cardinals during an 11-year career through 2020, is in charge of lunch for about 170 preschool students through eighth graders -- and more than 200 on Taco Tuesdays -- at St. Paul the Apostle School in Grand Rapids, Michigan. For the past four months, five days a week from 7:45 a.m. to 1:30 p.m., Veldheer plans, preps and cooks an eclectic menu that's far from the typical school lunch fare: beef bulgogi, chicken tikka masala, smoked carnitas and chimichurri flank steak. The cost is $3.50, which has parents asking: "Can we come for lunch?"

Veldheer isn't shy about his love of food. He developed a creativity for cooking as a child, when, if he didn't like what his mom cooked, he'd have to make his own sandwiches, which led to him trying new ways to stack bread, meat, cheese and other things.

"I've eaten a lot of dishes," he said. "I like a lot of different types of food."

Now he's taking his experiences with food -- including eating vast amounts of it as an offensive lineman -- and putting it to use preparing the healthiest, most nutritious food he can to help children grow and develop.

How did he become the lunch man?
In early August, a couple of weeks before the school year started, St. Paul the Apostle found itself without someone to run their kitchen.

Veldheer, who as a parent of two children at the school and had befriended Morrow and given her advice on food and nutrition, expressed interest in the position. He was hired after a quick conversation about what to expect in making lunch for a couple of hundred kids.

"I've always liked cooking," Veldheer told ESPN. "I wasn't sure if I wanted to, you know, be the school lunch lady, but anyway, gave it some thought and I was like, I'm kind of looking for something to do with my time. It's not a bad gig time-commitment wise. I'm around my kids. So I just kind of went for it.

"I was not sitting around in my later years just trying to get to my next job as being the lunch man."

Morrow smiled when she started talking about the sight of Veldheer, who is 6-foot-8 and weighed 321 pounds, serving lunch to the school's youngest kids. He takes up most of the lunch window, she said. "A picture's worth a thousand words on this," she said. "I'm grinning ear-to-ear just picturing and seeing what I get to see every day, the kids looking straight up to him yet can feel so comfortable and confident in asking him questions and trying different foods, and really figuring out what he's doing.

"It's just a testament to who he is as a person and being so approachable to these youngsters."

Awaiting Veldheer at the school was a remodeled kitchen that, he said, looks like a professional space, equipped with a new range and a convection oven with French doors. He brought a Traeger grill and Blackstone flat top from home, and paired them with the one kitchen tool that's become a saving grace: the Instant Pot.

Veldheer starts cooking when he gets to the kitchen around 7:45 a.m. If he's making something with beans -- he only uses dry beans -- or rice, he'll put them in a pressure cooker and let them set. "Set it and forget it," he said.

Then he grills the chicken for the salad bar every day and starts on the main course and sides. He has another person who has experience in a professional kitchen helping him. Depending on the complexity of the meal, Veldheer may have a volunteer or two to help, but almost always has a couple to help serve lunch, which sees three groups go through the line from 11 a.m. to 12:15 p.m. In all, about 170 of the more than 300 students eat Veldheer's lunch.

"It's a phenomenal number," Morrow said.
Molly Cotter, who has three kids at the school, has been "massively impressed" with what Veldeer has done. But she was not alone in being skeptical at first.

"When he started, and it was before school, we all got the menu, and we were like, 'He's gonna feed our kids braised cabbage and like mashed cauliflower? They are never gonna eat it.' We were like, 'He's nuts.'

"But I gotta say, I mean, we just keep getting more and more impressed. My kids love the food."

Veldheer has to make his menu about a month out because the school uses an online portal for parents to order food about two weeks before the first day of the month. When his first menu went live, "it was a bit of a culture shock," Morrow said. Parents, she added, weren't sure about the sustainability of Veldheer's vision, especially after years of typical school lunches of chicken nuggets, pizza and fries.

Veldheer tries to adhere to a handful of nutritional tenants with his top goal being "to nourish developing humans." To do that, Veldheer leans heavily on his time in the NFL, where he took an interest in exercise science and nutrition.

"A lot of kids just eat crap," he said. "I think we live in a time where a lot of kids just kind of get by with snacking all the time with just processed crap in the cupboard. So, it's like, if I can just make it my goal to give them one nourishing meal, then that's good."

Veldheer has limited or taken out as many seed oils -- such as soybean or corn, which he said contain polyunsaturated fatty acids and can lead to inflammation -- as well as excess simple sugars. But he will make cookies once a week and has cinnamon rolls planned for the last day before winter break.

"I've learned that it's really hard -- it's almost impossible -- to get all the kids to eat stuff because one kid loves one thing and the other kid doesn't and they eat the other thing, so as long as you get kids really kind of all in on the main course, and then you're able to get some of the kids on the sides, that's a big bonus," Veldheer said.

And even when the kids may not be completely enthusiastic about what they're eating, Veldheer will help them along. He wore lederhosen on a day that he served German food and will play Hispanic music on Taco Tuesdays. And if that isn't enough, he's been known to roam the cafeteria to see if kids like the food.

"He'll go in the cafeteria and be like, 'Alright, everybody, I want you to take a bite of those beans. I made them special for you,'" Cotter said. "And boy, did they do it."

Veldheer calls the work "fulfilling," even when he gets some harsh feedback.

"The kindergarteners are probably the most brutal," Veldheer said. "Middle schoolers are, they're awesome. But I've learned you cannot judge the meal by the kindergarteners or preschoolers. That would be a bad one to go off of. They're wild cards. You never know how they're going to respond to it."

For more on Jared Veldheer and his role at St. Paul the Apostle, read this article by The Washington Post.