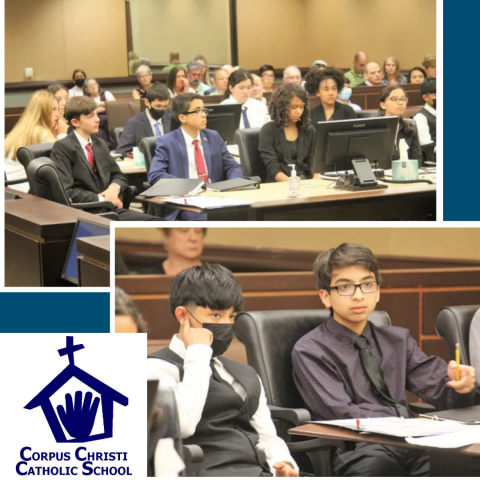 GRAND HAVEN — A group of local middle school students got a unique look into the criminal justice system Friday (May 13, 2022) in Grand Haven.

Students from Corpus Christi Catholic School in Holland participated in a mock murder trial at the Ottawa County Courthouse. They assumed the various roles of the legal system as a way to learn and practice skills. The project gave students a chance to gain experience with public speaking, analyzing events, deductive reasoning and critical thinking.

It also gave them a look into how the justice system works, including the various careers in the field. Students called their own witnesses, asked questions and called objections during testimony.

“This experience (is) exquisite in promoting cooperation and healthy academic competition among students possessing various abilities and interests,” teacher Megan Willems-Koster stated in an email. “There is nothing like hands-on experiences beyond the classroom walls to help students learn about the law, society and themselves.”

Students have been working for months learning about the legal system, proper terminology, the roles of different legal careers and court decorum. They were then each given roles for the case and details to memorize.

Ottawa County Judge Jon Hulsing presided over the case. During jury deliberations, Hulsing went through and gave each student feedback on how they did during the trial. He complimented the group overall as well, saying it was one of the best student trials he’s been a part of.

“I think this is the best one ever,” he said. “I’m always impressed with the work that students do and, honestly, this was fantastic. You guys were fantastic, really impressive. This restores my faith in the next generation.”

The hypothetical case centered around the death of a high school student who had caught two others cheating on a test. The prosecution charged the defendant, one of the two students caught cheating, with second degree murder, with an option for a lesser charge of voluntary manslaughter. One team of students assumed the role of the prosecution, while another group served as the defense. Two students served as bailiffs as well. A pre-trial motion was added to the proceedings this year, with the defense arguing to strike a police interview from the evidence due to violation of fifth amendment rights. Students on both sides cited prior case precedents and legal interpretations in their arguments before Hulsing sided with the prosecution.

“Those briefs were fantastic,” Hulsing said following the trial. “The documents, the motions, that were put forward were so well crafted, it was really impressive.”

During the trial, both sides called four witnesses, also played by students. Witness roles included a fellow student, two doctors, a school dean, a reverend, a police officer, a park ranger and the defendant. Following two hours of questioning and about 40 minutes of deliberations, a jury of five adults returned a verdict of not guilty on both counts.