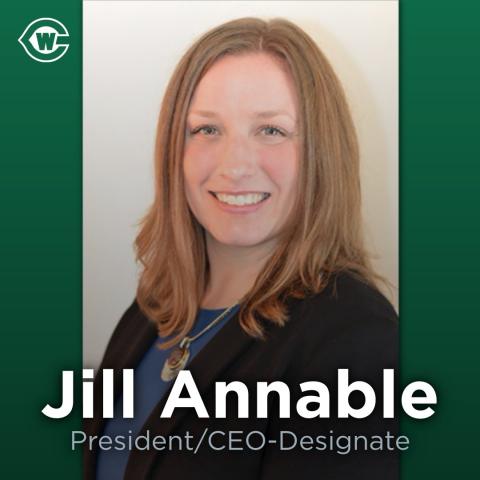 West Catholic High School is excited to announce the appointment of Jill Annable as the school’s next president/CEO. Mrs. Annable will transition into her role as president/CEO-designate beginning on August 15. She will be working part-time alongside current WC President/CEO Cynthia Kneibel until the end of the calendar year and then full-time until Mrs. Kneibel’s retirement on January 20, 2023.

“I look forward to working with Jill during this transitional period,” Mrs. Kneibel said. “I am confident she will continue to build upon our foundation of faith as she leads West Catholic in forming Disciples of Christ through a dynamic, excellence-driven Catholic education.”

A 2002 WC graduate, Mrs. Annable has dedicated much of her career to Catholic education. In 2015, she was hired as an English teacher and curriculum consultant at West Catholic. The following year, Mrs. Annable was named assistant superintendent of Catholic schools in the Diocese of Grand Rapids. In this capacity, she led the advancement of curriculum standards throughout the diocese to align with Catholic teaching and best practices.

“I am excited to collaborate once again with Jill, this time in her new role,” said Dave Faber, superintendent of Catholic schools in the Diocese of Grand Rapids. “We are blessed that her passion for Catholic education has brought her back home to our alliance of Catholic schools.”

Mrs. Annable most recently served as the senior vice president of programs for the National Catholic Educational Association (NCEA). While there, she worked with Catholic school teachers and administrators across the country to provide professional development opportunities in key areas pertaining to excellence in Catholic schools.

Adding to her professional achievements, Mrs. Annable is an accomplished writer and speaker. During her time with the NCEA, she co-authored “Greatness in Smallness: A Vision for Catholic Microschools” and authored “Greatness in Smallness: Effective Multiage Instruction in Catholic Microschools.” Mrs. Annable has also presented at many conferences and events, including the NCEA Leadership Summit, the Michigan Association of Non-Public Schools Education Conference, and the Mustard Seed Project, which explores the importance of serving students with disabilities within the Catholic school setting.

“As a West Catholic student, I was provided with an unparalleled faith community and developed a strong love for learning. It is an honor to return to West Catholic in this role,” Mrs. Annable shared. “There is no better place to walk alongside parents in the formation of their students. I look forward to serving as we implement a vision that will impact the next generation of Falcons.”

For more on the president/CEO position, please visit grwestcatholic.org/presidentceo.