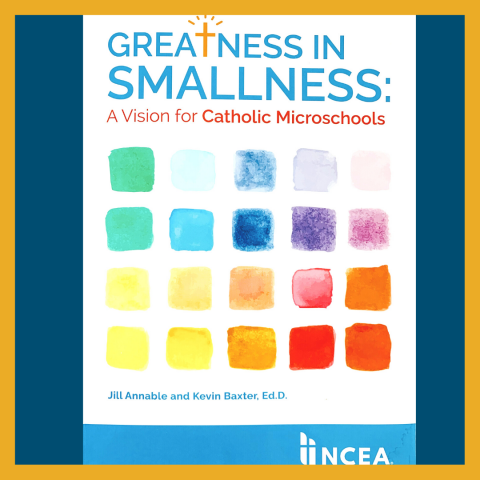 In June, the NCEA published a book titled Greatness in Smallness: A Vision for Catholic Microschools co-authored by our previous assistant superintendent, Jill Annable. With collaboration from educational leaders across the nation but specifically in the Grand Rapids area, the book takes a closer look at purposefully small and sustainable Catholic schools - microschools.

From the prologue of the book, “the term Catholic microschool refers to a sustainable Catholic school that is rooted in the tenets of Catholic faith and that has employed excellence in faith formation, academic programs and operational vitality while maintaining a student population that is smaller than its neighboring schools. Overall, 25 percent of the Catholic schools in the United States serve a population with less than 150 students. Greatness in Smallness: A Vision for Catholic Microschools, examines effective practices that Catholic microschools use, as aligned to the National Standards and Benchmarks for Effective Catholic Elementary and Secondary Schools (NSBECS).”

In response to NCEA’s book, a team of leaders from the Diocese of Joliet traveled to Divine Providence Academy in Conklin and St. Thomas the Apostle in Grand Rapids today. This team is looking to our schools to better understand multi-age learning in a successful microschool. It is a great testament that our schools are being sought out because of their expertise and extraordinary leadership.

Here are our local, talented contributors for Greatness in Smallness: A Vision for Catholic Microschools: