Classroom Correspondents: March for Life inspires hope for the future 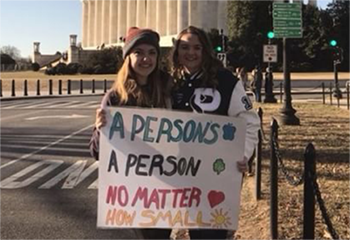 This post was written by Portland St. Patrick junior Summer R., reflecting on her participation in the March for Life, Jan. 19, 2018. Summer is a member of the Portland St. Pat's Student Ambassador Team. She's on the right in the picture, next to fellow junior Grace T.

The March for Life has always inspired me. Every year, I have always wanted to be a part of it, but have had other obligations. This year, when I heard that all sports and school activities were cleared, I jumped at the opportunity to go. I expected the march to be a great experience, but I never expected that it would have such a profound impact on my life. It is difficult to put into words as to how great my experience was.

Our trip began on Thursday with an early morning on the road. After a long bus ride, filled with singing, movies, and stories, we arrived in Washington D.C. After freshening up, we attended a rally at George Mason University. It was a beautiful experience that I will never forget. At the rally, we listened to very powerful speakers, sang of God’s glory, and experienced our Lord in adoration. These things set the mood for the morning to come.

We began the next day by sightseeing. We had the privilege to visit some of the most famous monuments in the United States. About an hour before the march, we attended another rally. This rally was especially inspiring because it consisted of many testimonies from mothers who had experienced the effects of abortion first hand. There were also many politicians who showed up to offer their support for the pro-life movement. It was comforting to know that there are many elected officials working for the rights of the unborn.

See March for Life photos from the Portland St. Pat's pilgrims in the gallery below or at this link.

When the march began, I was overwhelmed by the amount of people there. It was beautiful to see so many people give up their time for a cause that they believe so strongly in. Just being with all those people gave me hope for the future. The theme for the march this year was, “Love Saves Lives.” While I was marching, I began to meditate on the ways that this phrase embodies the pro-life movement. I came to the conclusion that the only way that we can win the battle against abortion, is through love. The March for Life is rooted in love. We do not march with hateful hearts, but march with loving hearts, full of hope for the future.

When the march was over, we spent some time at the Basilica of the National Shrine of the Immaculate Conception. We attended Mass, and offered up our prayers for the unborn. The next day, it was time for us to return home. Although I was not ready to leave Washington D.C., I was excited to come home and share all that I had experienced with others. I was deeply moved and ready to expand the pro-life movement. I am eternally grateful for the experience and am looking forward to going again next year.

Learn more about the March for Life here.