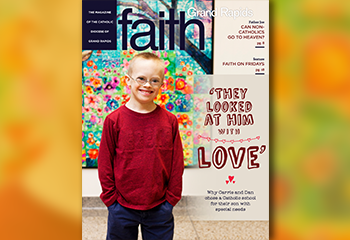 This story originally appeared in the April 2020 issue of FAITH Grand Rapids magazine. It was written by Maryalene Laponsie and features photography by Holly Dolci.

‘They looked at him with love’

The Brzezinski house is a busy place. Visitors may be greeted with a hug, presented with artwork and entertained with somersaults. Dancing, running and yelling could all quickly follow. And oh yes, there may be crying.

With four children ages 8 and younger, Dan and Carrie Brzezinski are at the helm of a vibrant family. It’s one in which siblings romp together, and children climb on laps for whispered conversations with Mom. However, the couple have found themselves on a parenting path that is much different than any they could have anticipated when they married in 2011.

Their first son, Daniel, was born with Down syndrome. That meant the two needed to adjust their expectations. For Carrie, it felt like the end of a dream to have her son receive a Catholic education.

“I loved going to Catholic school,” Carrie says. She attended a parochial school in Flint and has happy memories of her time there. She always assumed her children would have the same experience. However, “When Daniel was born, I thought it was off the table,” she remembers.

God thought otherwise though. He led the family to St. Thomas the Apostle Catholic School in Grand Rapids, where Daniel is in 1st grade. There, he is a vivacious part of his class and has been embraced by teachers and students alike. Dan and Carrie say it was a long process to find the right school for Daniel, but they are thrilled that he can now experience the Catholic education that Carrie remembers so fondly.

A search brings them full circle

When Daniel was born, Dan and Carrie lived in Grand Rapids. They met through a young adult group at St. Thomas the Apostle and were married there. Daniel received a year of services through Early On, an early intervention program for children 0-3, then the family headed east to the outskirts of Lowell. The move gave them plenty of space to raise chickens and enjoy a more rural lifestyle. They joined St. Mary Mother of God Church in Lowell, and Daniel was enrolled in educational programs through an area public school district.

Dan and Carrie said it didn’t take long to discover that the public school system might not be the best fit for Daniel. Their first indication came when they asked that their son be allowed to repeat the Young 5s program. The school district eventually agreed, but only after what Dan describes as “a lot of encouragement from us.”

After two years of Young 5s, the district wanted to move Daniel to a program in Ionia for students with special needs. Carrie says that was understandable given the limited resources available in the small district. “They were being realistic,” she explains.

However, after visiting the program, Dan and Carrie knew immediately that it wouldn’t be the right place for their son to grow. Although Daniel has mild cognitive impairments, the only room with an opening was intended for those with more moderate to severe challenges. “We went to see the class they wanted him to go to and then we realized he wasn’t going to advance there,” Dan says.

“We felt we needed to see other options,” Carrie adds, and the couple began to rethink whether Catholic education might really be off the table for Daniel.

In order to find the right school, Daniel’s parents talked with staff from several Grand Rapids-area parishes. While diocesan schools have made it a priority to be more accommodating of students with special needs, each is at a different place in this process. For instance, Carrie recalls one school telling her they were happy to welcome Daniel but the family would be “blazing a trail.”

Then, through a friend, Carrie heard about Audrey Jandernoa, a little girl with a big heart who had attended St. Thomas the Apostle. Audrey had Down syndrome and died at age 5 in December 2018, but she had already blazed a trail at her school.

“It’s like all the obstacles were suddenly gone,” Carrie says. The school was not only willing to enroll Daniel but already had in place systems to meet his needs. They welcomed him with open arms, and Carrie remembers feeling relief that her son would not be viewed as a burden. “They were looking at him with love,” she says.

“For me, it came down to dignity,” says Carrie. “When you look at a person with special needs, you don’t just see their limitations – wheelchair, white cane, braces – you see this beautiful creation that God gave this world. That’s so paramount to our faith.”

The Brzezinskis worked with many caring teachers and staff through the public school system and appreciate everything they did for Daniel. However, they also realize that there are factors outside the control of these compassionate educators.

“In the public school, there is always the pressure for [acceptable test] scores,” Carrie notes. The public education system, by virtue of its size, may not be as nimble as a smaller parochial school. At St. Thomas the Apostle, the school is more than happy for Daniel to study alongside his peers in classes like reading, where he excels, but arrange for modified lessons in harder subjects like math.

Dan and Carrie say Catholic schooling has had benefits for the whole family. The curriculum at St. Thomas the Apostle teaches about good character and virtues and incorporates traditional prayers such as the rosary and the Angelus into the school week. “It’s reinforcing all the things we’re teaching them at home,” Carrie says.

Daniel has no trouble fitting in with his peers. “He has such a set of friends [at St. Thomas],” Dan says. To which Carrie adds, “He never plays alone.”

Thanks to his two years of Young 5s, he excels at reading, and the other students in his kindergarten class were quick to ask his help with sight words. Daniel and his sister Ann Marie, who is now in kindergarten, have also developed a special bond with Audrey’s sister Samantha.

Carrie has always wanted her children to learn in a Catholic environment, particularly at those young ages when they are soaking in everything they see and hear. She looks forward to her younger children, Maggie, 4, and Jane, 1, joining their older siblings at St. Thomas the Apostle.

The mom of four knows that nothing is certain in Daniel’s future. What works one year might not work the next, and every child with Down syndrome has different needs that may be best met by different schools, both public and private. However, she feels as though she and Dan have a committed partner in St. Thomas the Apostle School and looks to the future with optimism as they work together to craft an education that nourishes both Daniel’s mind and soul.

Related: Watch this video to learn about our Student Support Services Network

Catholic schools in the Diocese of Grand Rapids are an alliance of 31 vibrant learning communities (26 elementary and five high schools) serving more than 6,340 preschool through 12th grade students throughout West Michigan. Our schools inspire young people to grow in Catholic faith and grace, achieve more in school and life, develop creativity and character, and feel welcomed and cherished for their unique gifts. We partner with parents to awaken the whole child to a world of light and life — that grows better and brighter when children reach their potential.