On Giving Tuesday, Catholic school students show kids can give, too 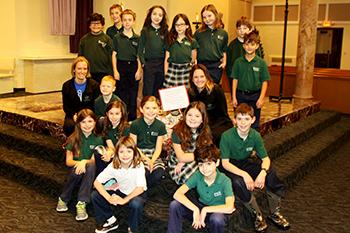 Demonstrating that “kids can give, too,” students at several Catholic schools in the Diocese of Grand Rapids joined the philanthropy effort called Giving Tuesday on November 29, 2016. The annual international effort celebrates charity and service on the Tuesday following Thanksgiving, Black Friday, Small Business Saturday, and Cyber Monday. It encourages people to make donations to charities and other nonprofits.

Students at St. Thomas the Apostle Catholic School and St. John Vianney Catholic School both collected donations for the Children’s Healing Center, a Grand Rapids organization that provides a safe, clean place to play for children with weak immune systems. St. Thomas the Apostle students spent the month of November bringing in whatever amounts of money they felt called to give, and by the time donations were counted they had collected nearly $600, given to representatives from the Children’s Healing Center on Tuesday morning.

“It’s really moving,” said Children’s Healing Center associate director Melissa Block. “We live in a society where people tend to think of themselves, so to be able to teach kids at a young age to think outside of themselves and to think about others is just a really wonderful experience.”

“Our students have learned the virtue of generosity, and over the month of November they have contributed on a daily basis -- proving that kids can give, too, and make a difference in the lives of our community,” said St. Thomas the Apostle development and outreach coordinator Betsy Edgerton.

The St. John Vianney student council sponsored a “Jeans for a Dollar Day” on Giving Tuesday to raise money for buying an item for the Children’s Healing Center. Both schools called their efforts “Giving Too-sday” to incorporate the theme that children give, too -- not just grown-ups.

Divine Providence Academy students in Wright and Ravenna are also contributing to Giving Tuesday projects. Students are donating items for foster children they’re sponsoring for Christmas, as well as bringing in food for the Lions Club’s Love Connection program.