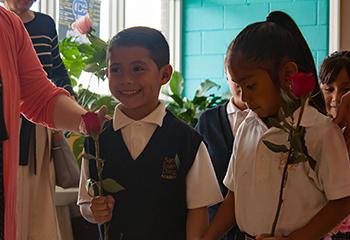 At the May crowning on May 4, 2018, each student laid a rose before an image of Our Lady of Guadalupe, symbolically honoring Jesus Christ’s mother who is also our mother in heaven. The ceremony culminated with one student placing a beautiful crown of flowers on top of the statue.

Many members of the San Juan Diego Academy community attended the ceremony, including Most Rev. David J. Walkowiak, bishop of Grand Rapids. See event photos in the gallery  at this link.

The event also featured recognition of a woman and two young women for their achievements in STEM fields (science, technology, engineering and math). A posthumous award was received by the family of Lorene Courtney, who was an alumna of Holy Name of Jesus Catholic School (the earlier name of San Juan Diego Academy). Her achievements in STEM include being the first woman to work in the lab at Haviland Products in Grand Rapids. When she and her husband began having children, Lorene then paused her career to raise the children. When the children were grown, Lorene began teaching high school math and chemistry. Amway then hired Lorene as a scientist in their skin care lab, where she worked for 17 years. Read more about Lorene Courtney here.

Next, San Juan Diego Academy alumna Nohemi Toledo discussed how SJDA and Catholic Central High School helped her prepare for her ongoing undergraduate career involving two degrees from Saint Mary's College and Notre Dame. She is studying computing and applied mathematics at Saint Mary's College and computer science at Notre Dame. She is also earning a minor in theology.

Then attendees heard from a current SJDA student. Lendy, a 6th grader, spoke about how her current studies have sparked an interest in a potential STEM career in the future.

San Juan Diego Academy’s May crowning inspired prayerful reflection on Mary’s participation in God’s plan for our salvation through Jesus Christ. It was also a celebration of the ways in which Catholic education, established on a foundation of faith, prepares students for cultivating their gifts and sharing them with the world.