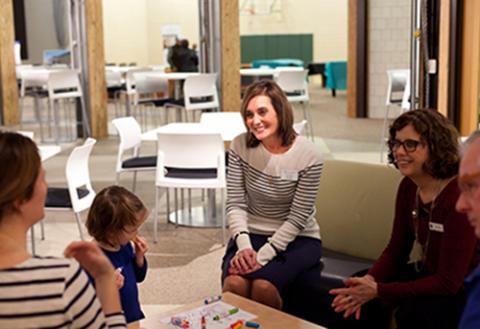 This article originally appeared in the May 2018 issue of FAITH Grand Rapids magazine. Writing by Tom Kendra. Photography by Holly Dolci.

Liz Peters shifts gears effortlessly, talking with a co-worker one minute about the color scheme for a classroom, a reporter about the opportunity presented by starting a school from the ground up, and then a parent about the myriad benefits of a Catholic education.

It’s all in a day’s work for the founding principal of the new independent St. Robert Catholic School in Ada, which will open this fall with preschool for ages 2-4 and kindergarten, with one grade to be added each subsequent year through eighth grade. Beforeand after-school child care also will be offered.

The excitement, challenge and 1,001 details of opening the first new Catholic school in the Grand Rapids Diocese in more than 50 years (where one did not exist previously) is daunting, Liz says. In her quiet moments of prayer, she often asks God one question: “How is it that I have what it takes to do this?”

Liz has been mulling over that question since Jan. 8, when she started her work at the school, located on the campus of St. Robert of Newminster Catholic Church (6477 Ada Drive). She has come to understand that, individually, the job would be too much to handle. But with her strong faith, she knows that God has been guiding her to this moment for the past 20 years.

“I realize now that nothing that happened was an accident,” says Liz, 52, who brings with her 15 years of experience in Catholic education, first as a classroom teacher at Corpus Christi Catholic School in Holland and most recently as an assistant principal at St. Thomas the Apostle Catholic School in Grand Rapids.

“All of the different experiences and people led me to this moment, this opportunity, today. It was God’s plan.”

Liz, who has worked closely with the St. Robert Board of Trustees since taking on her new position earlier this year, has impressed board members with her infectious energy and charisma.

“Liz is an accomplished educator and administrator,” says St. Robert Board Chairman Mark Murray. “She is very well-prepared for this role as founding principal. Her tenacity and enthusiasm are important gifts as she tackles this exciting project.”

When the new principal sits down with a young couple trying to find the right educational fit for their family, she can certainly relate.

Liz grew up in Waterford, Michigan, and moved around often in the early years of her marriage to Tony, who was in the military. In the late 1990s, after starting her professional career teaching preschool in the Washington, D.C., area, the couple decided to move back to Michigan with their son, Ajay, and set down roots.

The Peterses chose Holland, in large part to be near family and also because of its proximity to Tony’s work. After settling into their physical home, the Peterses, who were married in the Methodist faith, began their quest for a spiritual home.

“My sister (Wendi) invited us to come to church with them,” says Liz, recalling her introduction to the Catholic faith in the late 1990s at Our Lady of the Lake Catholic Church in Holland. “We knew right away that we had a found a home there. We knew it was meant to be.”

The feel and the fit were so right, so immediate, that it didn’t take long for the Peters family to go through the RCIA program and formally join the Catholic Church at the Easter Vigil in 1999. Shortly thereafter, she went back to school at Grand Valley State University, completing her bachelor’s degree in English language arts and literature, with a minor in education.

Now it was time to find a place to teach. Once again, Liz found herself drawn to the Catholic faith.

Peters was hired in 2003 at Corpus Christi Catholic School in Holland, which had opened its doors just three years earlier. Peters treasured her years at Corpus Christi, which is considered a model of collaborative ministry and administration as it serves two distinct parishes, Our Lady of the Lake and St. Francis de Sales.

“My time at Corpus Christi is where I learned there is something special about Catholic schools,” says Liz, who taught second through fifth grades. “It was wonderful starting each day gathered in prayer with the kids. There is a peacefulness in Catholic schools that you don’t find anywhere else.”

A NUDGE FROM GOD

“I kind of started feeling that there was something else that I was being called to do,” she recalls. “With my experience, I felt like I could help teachers find other ways to connect with their students.”

That nudge led to her move in 2013 from elementary teacher in Holland to assistant principal at St. Thomas the Apostle Catholic School in Grand Rapids, where she has worked for the past 4.5 years.

The new job also allowed Liz to join her husband on his daily commute from Holland to Grand Rapids. For four years, that time in the car became very special for the couple, until one day early last year, almost out of the blue, she blurted out: “We have to move."

“That was another one of those moments where God was talking to me and moving me toward this opportunity,” says Liz. “God has certainly been in control of my life over the past year.”

Last summer the Peterses put their home in Holland up for sale and started renting an apartment in, of all places, Ada. As fate would have it, the Peterses started attending St. Robert and soon learned about the parish’s plans to build a new elementary school – and Liz started looking into getting involved.

Suzi Furtwangler, the principal of St. Thomas the Apostle believes that her colleague was led to this new opportunity for a reason.

“Liz has the energy to get this school started,” Suzi says. “When we were together, she was not afraid to dig right in and do what needed to be done. Her enthusiasm will create an appealing atmosphere for families, children and teachers to grow in their faith as they build a new tradition together.”

One of the latest trends in education are “immersion schools,” where children incorporate a second language – often Spanish or even Mandarin Chinese – as part of their everyday routine, rather than as a separate class once or twice a week.

Liz often introduces St. Robert as an immersion school, too.

“We are the Catholic faith immersion school,” she says. “That is what we can offer throughout our curriculum and that’s what sets us apart. I understand that there are great schools all around us, and we can offer the programs they have. But they can’t offer the Catholic education, which so many families want for their kids.”

Through a program called Education in Virtue, a different Christian virtue will be emphasized each week and St. Robert students will be challenged to show it during the day and practice it at home with their families.

Liz is enthused to have found an active, vibrant faith community at St. Robert. “A Catholic school adds something special to a parish,” says Father Len Sudlik, pastor. “Having children, full of life, present in our midst every day is exciting. As pastor, it will be a joy to be able to be their spiritual father.”

St. Robert is also blessed with excellent facilities, including modern classrooms currently used for faith-formation classes and a family worship center with a gymnasium, which is ideal for school assemblies and gatherings. In addition, St. Robert’s campus is undergoing a $1 million renovation to build additional classrooms and a new school entrance.

All of these factors have Liz and other school officials excited for the grand opening this fall and for what the future holds.

“I just can’t wait until the day kids arrive,” said Liz, stopping for a moment on a tour of the building to envision that moment. “It will be magical. The children will breathe so much life and so much energy into this building. It is just a beautiful thing to see.”