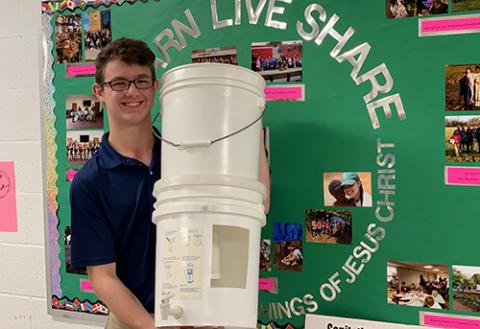 Every Advent at Holy Spirit Catholic School in Grand Rapids, students challenge each other to raise as much funds as they can to give water filters to people in Haiti. For one 8th grader named Carter, the fundraiser has a deeply personal meaning.

Carter’s Great Aunt Rita and Great Uncle Jim Cwengros traveled several times to Seguin, Haiti, as part of Holy Spirit’s sister-parish relationship with a church there. Tragically, Carter’s aunt and uncle gave their lives during a January 2013 mission trip. The brakes failed in the car they were using, causing it to crash over a cliff and down a mountainside. Two other missionaries, Matt Kutsche and Mary LaPonsie, also passed away.

Carter honors his aunt and uncle’s memory with his enthusiastic participation in the water filter fundraiser. Carter even encourages his other aunts and uncles to give, too!

All told, the whole school collected over $4,300 this year, enough to buy 145 lifesaving water filters for Seguin residents.