A Vocation to the Service of Education 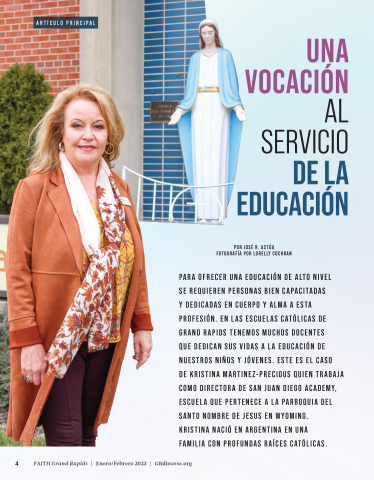 To offer a high-level education requires well-trained people who are dedicated in body and soul to this profession. In Grand Rapids Catholic schools we have many teachers who dedicate their lives to the education of our children and youth. This is the case from Kristina Martinez-Precious who works as principal of San Juan Diego Academy, a school that belongs to the Holy Name of Jesus Parish in Wyoming.

Kristina was born in Argentina into a family with deep Catholic roots. Kristina tells us that her father worked for an international company, which led them to live in Mexico City from Buenos Aires for a while and then move to Muskegon, where she has stayed ever since. She did her higher education at Hope College where she earned a bachelor's degree with an emphasis in languages studying German, French and Spanish. She later received her master's degree in education from Aquinas College. For nearly three decades, she worked for the Grand Rapids and Muskegon public schools, and for 25 of those years she served on the side as an adjunct professor of education at Aquinas College.

Kristina is passionate about bilingual education and this led her to become the main founder of South West Community Campus, a Grand Rapids school that has an immersion program in Spanish and English. Her arrival at San Juan Diego Academy occurred thanks to the invitation made to her by Dr. Susan English, a professor at Aquinas College and a member of the San Juan Diego Academy board of directors, to apply for this position. Kristina tells us, “I came and fell in love with the school immediately and the next week I resigned my position at Muskegon”. This is how since August 2019, she became the director of this school. We asked her the reasons why she decided to serve in a Catholic school and she replied, "Even knowing that the salaries are lower than in other institutions such as public schools, here the atmosphere is full of harmony, it is calm, the children are very respectful of their teachers, parents support teachers when there is a discipline conflict. Walking through the corridors you can feel the harmony, it is a magical place, you feel the Holy Spirit here."

Fr. Stephen Dudek states that this school has a history of more than 110 years, changing from Holy Name School to San Juan Diego Academy approximately 10 years ago. During all these years of existence, the school has been adapting to the population in turn serving Polish, German and Irish emigrants. By closing many of the parochial schools in the area, the initiative to serve the local community, which at that time and to this day is largely Hispanic, arose.

Parishes such as Santa María, Nuestra Señora de los Dolores, San Francisco Xavier, San José Obrero and the Cathedral of San Andrés joined to be part of this project. This student community faces many obstacles on its way to success since the majority of its students come from homes with limited financial resources. Mrs. Martinez-Precious tells us that on many occasions it is a challenge for students to get to school, because families do not have reliable transportation, or in homes they have to decide between putting in gas, buying food, paying rent or buying medicines. All these inconveniences make the work of teachers and other school employees difficult, turning it into a true ministry to those most in need and giving full meaning to the existence and continuity of San Juan Diego Academy. Kristina tells us, “Without this school the children of our community would not have the opportunity to receive a quality education and a solid formation in the Catholic faith.”

Pope Francis, recalling the words of the Second Vatican Ecumenical Council when addressing the participants in the Congress of the International Organization for Catholic Education, reminds us that, "All people, of all races, conditions and ages by virtue of their dignity as persons, they have the inalienable right to an education that responds to their own vocation and is in accordance with their temperament, gender differences, culture and traditions of their country, and at the same time open to fraternal coexistence with other peoples, in order to ensure true unity and true peace on earth.” This right in turn implies a responsibility on the part of parents and for the church. In the case of parents, they should seek the best education for their children and for the church to offer and facilitate opportunities for its members to receive a good education.

Thanks to the guidance of the Holy Spirit, San Juan Diego Academy combines these two factors of a church concerned about its people and some faithful who strive to respond to God's call by providing their children and youth with the best possible education. "But the Spirit of God does not cease to bless us, because we know that the cost of a Catholic education is high. However, thanks to his providence reflected by the support of countless benefactors, including companies in the area, foundations and other individuals who have realized the vital role that this school plays for the population of the area and for the well-being of the Church and society in general, the cost for families to study at San Juan Diego Academy is very affordable,” comments Fr. Dudek.

And director Martinez complements this comment, “There are parishes like St. Robert that make economic donations annually and also some of their parishioners have donated musical instruments for the school band. In conclusion, we are very grateful to the donors since this generation of Latino children is the future of this community and also of the church.”

To read the January edition of FAITH magazine (in Spanish), click here.